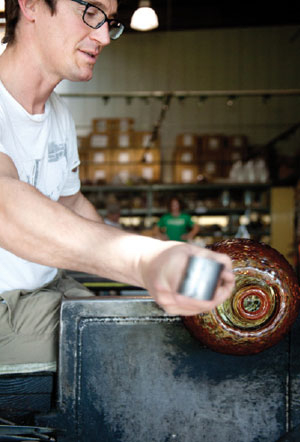 “Most glassblowers aren’t born artists,” says Caleb Siemon. “They’re born pyromaniacs.” Son of a jeweler, he grew up making things with his hands, got hooked on glass in high school, and honed his craft at the Rhode Island School of Design. He then set out for Murano, Italy, with a backpack, a few words of Italian, and the hope of an apprenticeship with renowned master glass sculptor Pino Signoretto. The maestro ignored him for a month, while Caleb attentively sketched his work and tried not to get in the way. Eventually an apprenticeship evolved. Caleb spent two years in the Muranese studio with the glassmaker versatile enough to produce both enormous sculptures and delicate goblets. Here, he was encouraged to “steal with his eyes.” Caleb’s style shows the influence of his early tutor, and an unabashed passion for the medium.

Caleb returned to Southern California in 1999 and constructed his own Italian-style studio. From furnace heights and bench design, to a system where each piece is created closely with a team of assistants, his methods reflect his Muranese immersion. Loris Zanon, Pino Signoretto’s master coldworker, traveled from Murano to guide the construction of Caleb’s coldshop and pass on the techniques of glass carving and polishing. From the Scandinavian glass tradition, Caleb has developed an affection for simple forms, taking advantage of gravity and centrifugal force in design. His work exhibits internationally and is featured in galleries around the world.

Click here for Videos or Images from the studio.